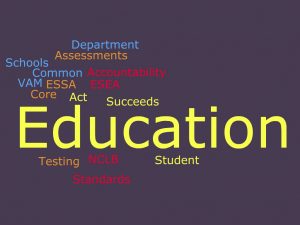 Given its power to dictate policy, many Americans think the federal government does most of the heavy lifting when it comes to funding K-12 education, but it doesn’t. Instead, that’s left up to the states and local communities. For instance, back in 2012-13, elementary and secondary schooling cost taxpayers about $1.15 trillion. Of that amount, the federal government contributed just 8% vs. 92% from non-federal sources.

Leading up to all that…

The first Department of Education was established back in 1867 “to collect information on schools and teaching that would help the States establish effective school systems.” Sound familiar?

Then, because of the Cold War and the Soviet launch of Sputnik, the National Defense Education Act (NDEA) for training in the science, technical, and foreign language fields was passed to help make us competitive.

Anti-poverty and civil rights laws followed in the ‘60s and 70’s, leading to such laws as:

It was not until 1980, however, that, thanks to Congress, the Department of Education became a cabinet level agency, affecting all aspects and levels of education, serving more than 50 million students in some 98,000 public and 32,000 private schools.

And there you have it…  With my many thanks, Carol

You have Successfully Subscribed!